The Gerber Institute for Catholic Studies is honored to welcome Kirk Bloodsworth, Advocacy Director of Witness to Innocence and a death row exoneree, who will speak on wrongful convictions and the death penalty at an event on April 16th at 7:00 p.m. The lecture, which is free and open to the public, will take place in the Dugan-Gorges Conference Center, in the Dugan Library and Campus Center on the campus of Newman University.

Mr. Bloodsworth was accused and convicted of a horrific crime: murdering and raping a nine year-old girl. The evidence used to convict him was the testimony of five eyewitnesses. He spent eight years in prison before DNA evidence proved his innocence. Mr. Bloodsworth is one of 142 individuals in the US to be sentenced to death and later found innocent.

While in prison, the Catholic Church provided spiritual support to Mr. Bloodsworth, who would convert to Catholicism. He also learned how DNA evidence had solved murders in Britain. In 1992, the prosecution agreed to DNA testing, which excluded Mr. Bloodsworth as the murderer. Ten years after the initial tests, investigators matched DNA from the case to the real killer.

While in Kansas, Mr. Bloodsworth hopes his story will highlight how anyone can suffer the injustice of a wrongful conviction: “I was a former Marine with no criminal record, who was nowhere near the scene of the crime, but I was still convicted and sentenced to death for a crime I didn’t commit. If it could happen to me, it could happen to anybody. And it does.”

In January 2012, the Gerber Institute welcomed another DNA exoneree, Darryl Hunt, who hosted “The Trials of Darryl Hunt,” a screening of the award-winning documentary about his life.

Biography of Kirk Bloodsworth, Advocacy Director of Witness to Innocence 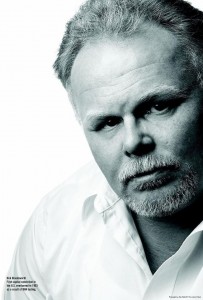 Kirk Bloodsworth, a former Marine, was exonerated by DNA in 1993 of the rape and murder of nine-year-old Dawn Hamilton. He was sentenced to death in Baltimore County, Maryland, in 1985. After Kirk’s conviction was reversed in 1986, he occupied a cell directly above Kimberly Shay Ruffner, who was serving a sentence for another rape and who would later be linked by DNA to the rape and murder of the child.

The evidence linking Kirk to the 1984 crime was the testimony of five witnesses who placed him either with the victim or near the scene of the crime.

In addition, the prosecution introduced forensic evidence purporting to link a pair of his shoes to marks on the victim’s body. But the Maryland Court of Appeals overturned Kirk’s conviction in 1986, finding that the prosecution had illegally withheld potentially exculpatory evidence from the defense. Kirk was retried and convicted again, and sentenced to two life terms.

In 1992, however, Centurion Ministries of Princeton, New Jersey, helped Kirk obtain court approval for DNA testing of biological evidence from the crime scene. The tests incontrovertibly established Kirk’s innocence, and he was released in June 1993. He was the first US death row prisoner to be exonerated by DNA. In December 1994, Maryland Governor William Donald Schaefer granted Kirk a full pardon based on innocence, and he was one of the few exonerated death row survivors to receive compensation from the state in which they were incarcerated.

In addition to speaking around the country for Witness to Innocence, Kirk has been an ardent supporter of the Innocence Protection Act (IPA) since its passage by Congress in February 2000. The IPA established the Kirk Bloodsworth Post-Conviction DNA Testing Program, which helps states defray the costs of post-conviction DNA testing.

Kirk’s story has been chronicled in the 2005 book Bloodsworth: The Story of One Man’s Triumph over Injustice by Tim Junkin. Kirk also has been interviewed in numerous media outlets about his wrongful conviction and efforts nationally to repeal the death penalty. Here is a selection of recent interviews and articles featuring Kirk: